Before the advent of the DAW musicians recorded rough “Demo” versions of their songs using a cassette or four-track machine.  A musician would record many different rough versions of each song and then pick out the best parts from all of them to re-record in a professional recording studio.

The Demo was a staple of the recording process for decades but has fallen out of favour because musicians and producers can now work directly on the final recording from day one. But is there still a benefit to making a rough sketch before starting on the final work?

Explore your untapped potential and turbo-charge your creativity with this great technique.

How the DAW can restrict our creativity… by being too powerful!

What’s the problem with DAW music?

You might have noticed that music created in a DAW can sound a little bit too sterile, or over-worked. It can lose the “magic” quite easily. That’s why many people are gravitating towards hardware, because of the immediacy. It’s easy to spend too much time tweaking parameters and trying to rescue a song in a DAW.  The issue isn’t with the technology of the DAW, it’s actually because we often take our first ideas and work them up in-situ… all the way to final product. Working this way it’s so easy to lose the magic.

Is this you in the studio?

You sit down at your equipment with a musical idea. You soon have a great beat going and over the next few hours you add some more loops and sounds, and eventually it’s full of ideas.  Now it’s time to create a song arrangement for these beats  so you put it on a timeline and you cut, paste, and make sections, builds and drops. Now some parts don’t work so you try a few different variations and sounds. You spend an hour trying snare sounds, bass sounds, trying different effects, until it all sounds better.

But that all took some time and the track doesn’t sound as fresh to you any more.  You’ve been listening to those 8 bars for an hour so you decide to spice it up with some fills, swapping a few samples, adding effects, and parameter tweaking until it all sounds bigger and more alive again!  Finally it’s time to do a mix, pumping the dynamics until it all sounds right.

The problem here is that you overworked it. You were writing the song at the same time as arranging and mixing. Sometimes that goes well, if you are a genius, but more often a track loses energy and impetus as we work on it.

Working with the “Demo-Based” process

How the Demo Improves your music

The Demo enables us to make better songs by creating different rough versions to try different approaches and tempos without committing to anything.

A Demo based workflow actually makes song-writing quicker and delivers better songs because you’ll know exactly what your options are, and what you are aiming for.

If you make several quick demos you have a lot of creative options to start with, you can harvest the best ideas before you commit a lot of time to editing and refining. You can listen to all your ideas together and see if you can combine different parts by making several different demos. Figure out what’s best about each of them, integrate them into A/B/ sections. Etc

The process of creating multiple parallel versions then cherry picking the best parts of those and assembling them is a very different way of working.  Creating demos means you can take your initial idea and take it in several very different directions without fear. 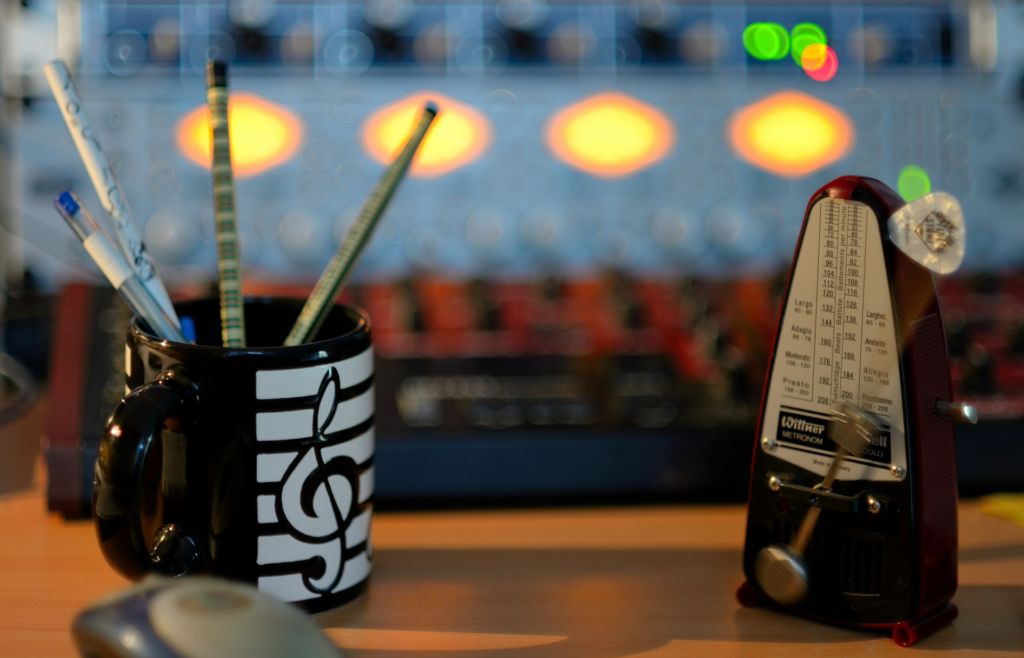 An example of a “Demo-Based” process

You sit down at your equipment with an idea…
You create a beat, a bassline, and a vocal loop, and it’s all sounding quite good but you don’t really have a strong idea where you want to take it. So – Save the file, we’ll call it “Origin”.

Create a new empty song and we’ll call it  “Demo 1”.  From the browser drag in the components from the Origin song into this new song. From here you can do anything you like with the contents, you can go wildly in any direction.  You slow it down to half speed, pitch the break down and double the speed of the vocal and chop it up into harmonies.   Let yourself be terrible. Put 9 reverbs on the bass, with distortion through a filter. Reverse the vocal and chop it up. Speed it up to double speed.  Demos are meant to be fun, rough and ready, this is about getting the soul of the song out.   Render out a 16 bar chunk. Now close that file.

Create a new one which you will title “Demo 2” drag those same components in, slice the break to midi, put a latin beat under it. Drop some different samples on top and edit them up to fit. Render out a 16 bar chunk. Close that file.

Keep going, Make as many as you feel like. Don’t be precious about these little sound chunks because you aren’t going for production quality here,  you are aiming to discover the song. Don’t take too much time on each Demo, perhaps just 15 or 30 minutes of exploration and seeing what happens.

After you have done this process a few times you’ll have a bunch of optional directions from your source.  Listen to a playlist of the ideas.

Create a new song called “assembly test” and drag these Demo renders in, try colliding them. Of course, they won’t fit together amazingly well. Listen to how different they all are.  You will hear how they might go together, you might think of a good A/B structure going from one to the other, you might see that two versions overlaid actually work quite well.

You have your “Assembly test” song with all the chunks inside it and you’ve tried your ideas out. You will know which things you liked best.  Now write your idea down!  A simple roadmap like “ Use Demo 2 as intro and breakdown. Go from Demo 3 to Demo 6 in an A/B/A/B. Keep the ambient funk vibe of Demo 3, but use the distorted version of Demo 6 after the middle”.   Try rendering out a quick rough edit of your assembly.

Now you have a plan, you have reference so all you need to do is build the song for real, think of it as taking your “Demo” into the studio, just like they did in the olden days!

You’ll soon realise why they were able to record great songs in just a day. They had a plan, they had reference material and the final finished and recorded version didn’t have all the bad ideas, it only had the ones which survived the crucible of the demo process.

The history of the Demo – An example

You can listen to some of the many Beatles “Strawberry Fields” demos and see how that famous song developed. Think of that first version, imagine if they’d recorded the first version into a DAW and tried to polish it up for release. Imagine if they’d tried even the third or fifth.   See how many demos it took to get the song into the shape they wanted.

If you found the “Demo-Based” process interesting, or if you have any comments, leave us a message!