Disco or funk claps are a distinctive sound of a group of people in a studio. Think of the intro to Car Wash by Rose Royce and you’ll know that it’s a great dance floor motivator, a human percussive sound which is very different to the tight drum machine claps of house. Here’s how to inject that cool 70s vibe into your track with an easy trick. We’ll make unique claps and then turn them into a funky clap machine to re-use whenever you want.

This is what we will be making:

The sound of funky clapping

The sound of disco claps is very human, it’s tight but with variations. It was traditionally produced by gathering the whole band around a single mic in the studio, with them listening back to the track on headphones they’d clap along onto a fresh track.

The sound of a group of humans clapping varies from bar to bar, as six or more different people each produce different clap sounds, and each at different speeds. The organic and varied sound of these funky claps can give a simple static rhythm track real life.

How to get those funky claps

Now, rather than gathering 8 band members and asking them to clap along to your song, you can recreate this yourself by multi-tracking your own claps. The simplest method of doing that is by using a Looper.  If you are working in Ableton Live you will very likely have access to the Ableton Looper device. But if you don’t have that Looper there are lots of free looper plugins available in VST and AU format.

You’ll need a microphone for this, but any microphone will have character so don’t worry if you only have a laptop microphone!  All microphones have personality, so whatever you have to hand will do the job just fine.  I’m using a single large capacitor diaphragm microphone, so the recording input is mono. It’s perfectly possible to create a stereo clap recording, you can experiment with that later – but for now we’ll create a single mono clap track. That’s what would be on a Disco record.

First, set up a microphone with a compressor on it. The compressor will bring in some room sound, which in this case adds a bit of realism. Claps without any room sound very sterile.

I use a harsh compression with a quite short attack time and a low threshold. The settings are: 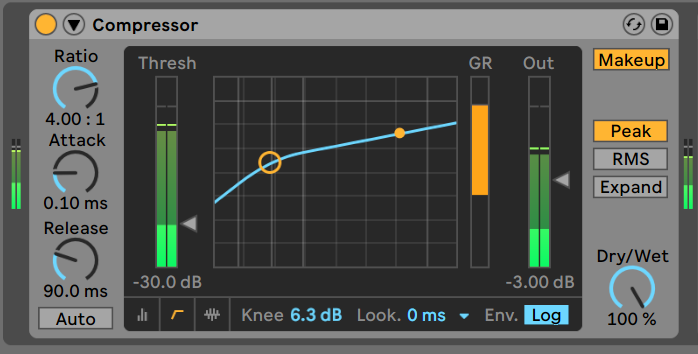 Add in a Looper with the loop length set to 8 bars. We need this amount of bars in the loop so that we can create eight different bars of varied clapping.  If we only created one bar of stacked claps then the resultant loop would be quite short and have a recognisable “loop” repeating sound.  We’ll grab a full 8 bars which gives us more options for future use. We might just pick our favourite bar from the 8, or we might extract our best claps to use elsewhere (we’ll get onto that a little later!)

The sound of eight people clapping

With the input signal chain set up, and your input levels all checked it’s time to record into the Looper.

Clapping styles: To make the claps sound like eight different people it’s best to try different hand shapes on each loop. So on loop one you might clap as you normally would, then when loop two starts try clapping more with your fingers, and move your hands to a different position relative to the microphone axis.

Let the looper record for 8 times that 8 bar loop, clapping in each loop with your hands in different positions.

Check out what you’ve made

Stop the live set and drag the loop out of the looper into a new track. Lets name this clip “Disco Claps”. Take a listen to “Disco Claps”  in Solo mode to make sure there are no issues with it. If everything sounds fine it’s ready to use.

Make your clap recording into a reusable Clap Machine

Now you have your funky disco clap track, but you don’t want to have to do that work all over again the next time you need some funky claps so lets make it into a playable preset.

Set the Simpler device to be in SLICE mode, with “Slice By” set to “transient”. This means you can play each of your claps on the keyboard without having to set anything up.

Now save that preset and you can re-use your disco claps in any way, and in any song you want. It’s that easy!

I hope you enjoyed this tutorial on making unique percussion sounds, thinking about adding personality to your beats in a slightly different way than you might be used to.