Most synthesizers have envelopes with four sections or stages, called attack, decay, sustain, and release. You’ll often see these abbreviated as ADSR.

You don’t hear the envelope directly — the synth uses the envelope’s shape to determine how one or more other aspects of the sound change over time. The envelope then modifies different parameters of the synth, for example the volume (AMP) the frequency (Filter) or the pitch. 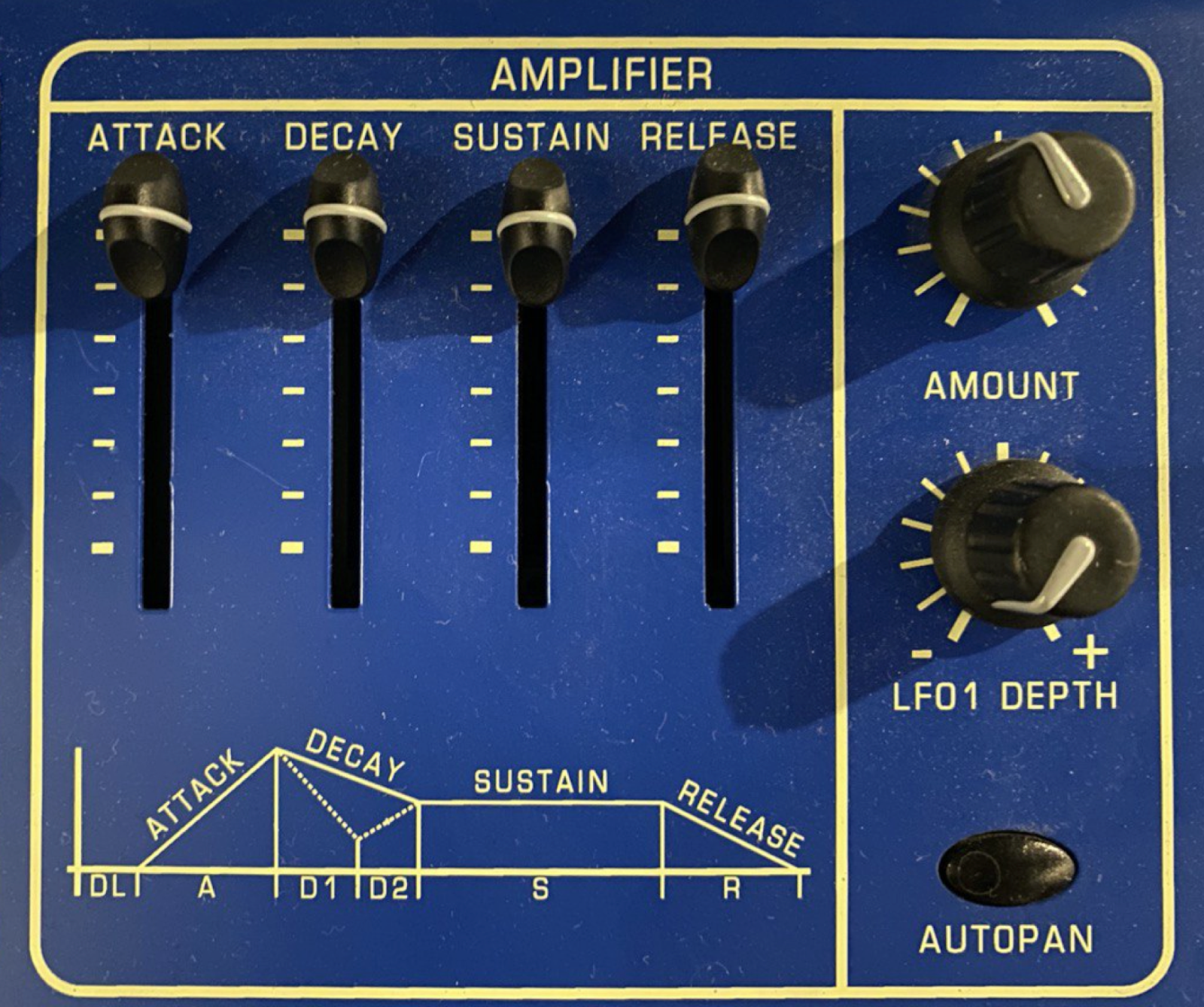 So, as we just mentioned, an envelope determines how the sound unfolds over time by telling another parameter how to behave. In this case, it is telling the Amplitude, the volume, how to behave from the moment the key is pressed or the note is triggered somehow, to the moment it is released and after.

Listen to the following example, and notice how it takes longer and longer for the note to get to its peak volume:

The envelope will then stay at the sustain level as long as the note is held. Listen to how we make the sound stay longer while we have the note held in the next example:

It controls the time taken for the envelope to decrease to its minimum level after the note is released. Listen to how we make the sound stay longer without having to hold the note and how we get a pad sound adjusting also the attack: 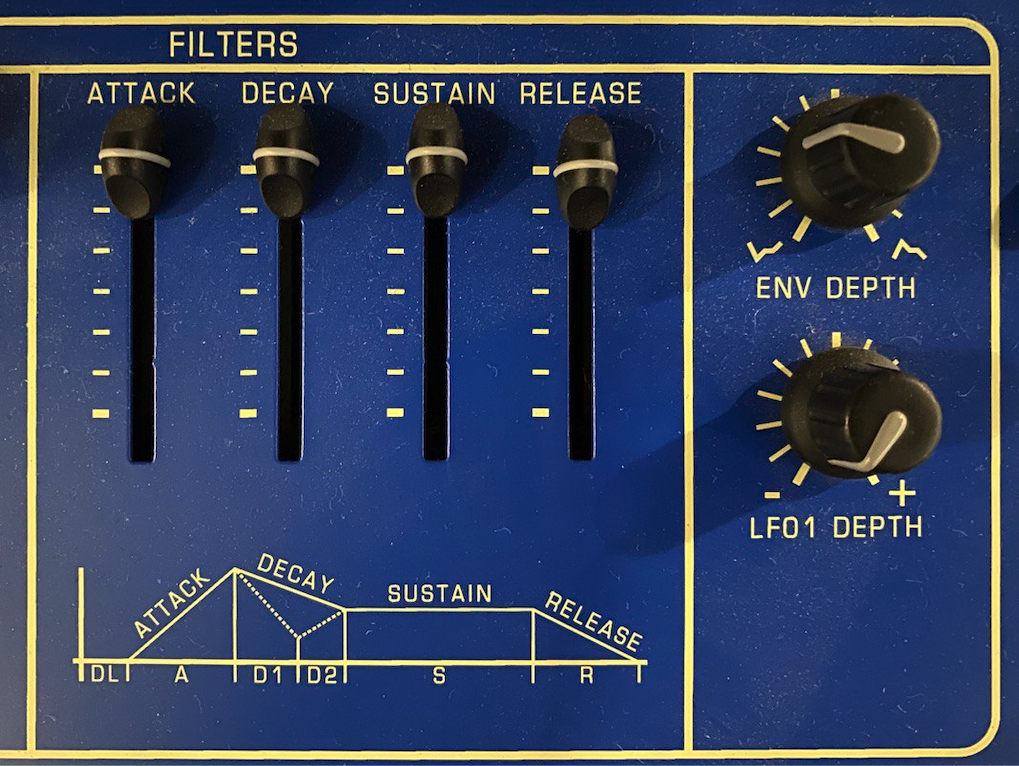 So now that we have understood how an AMP envelope works, it will be much easier to understand a filter envelope. Just remember the basic concepts of each step we have mentioned:

ATTACK: The attack controls the time taken for the envelope to reach its peak at the start of a note.

DECAY: The decay controls the time taken for the envelope to decrease from its peak to the sustain level.

SUSTAIN: The envelope stays at the sustain level as long as the note is held.

RELEASE: It controls the time taken for the envelope to decrease to its minimum level after the note is released.

In here notice how it takes longer and longer for the filter to act, and the sweep the sound it does when the attack is long:

In here, listen to how we go from a linear sound to having a downward sweep by reducing the decay:

In many synthesizers that have a filter envelope, you will also probably find a control called ENV or Contour in the filter section that sets the amount of envelope applied to the cutoff frequency. It is useful to know this because it can make the effect of the envelope over the filter vary a lot. 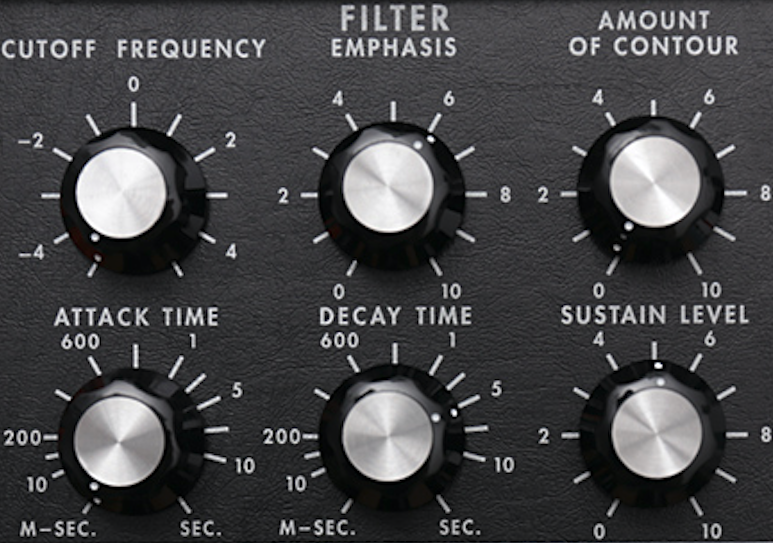 In the same way, you also have to consider that once you have more than one envelope shaping the sound of your synthesizer, you may find that you don’t get the results you expect by modifying just one envelope or the other. For example, if you have a very low attack affecting the volume, you cannot expect your filter envelope to solve the problem of little presence at the beginning of the note by turning up the attack. Therefore, your resulting sound will always depend on how you combine the different envelopes of your synthesizer.

We hope you enjoyed the post and you understand better what an envelope is. Once you give them a good try, you will realize how easy it is to use them, in any context they are. You will find them very useful to shape your sound!