Create a Detroit Techno pattern with the TR-909

Today the legendary drum machine turns 37! If you ever wondered about its origins, in this article we will tell you about them. We’ll also show you how to create a simple rhythmic pattern of the style of techno that made it most popular: the Detroit Techno.
Being as well known as the TR-909 is, it is incredible to believe that when it began to be commercialized, it was a failure. But the truth is that the technology used by Roland at the time to create our now much loved drum machine was too far from emulating the sounds of a real drum set, which is what was intended.

In 1983, the MIDI revolution was just taking place, and the TR-909 was one of the first products to incorporate this standard, combining the two generations of sound: analog and digital. The kick, snare, toms, and clap were all created from synthesis, and the hi hats and cymbals were 6-bit sampled sounds.

Despite the efforts by the Tadao Kikumoto team, Roland failed to position it as expected. What’s more, in the mid-80s it was normal to find the TR-909 in second-hand stores at very low prices. This helped it to fall into the hands of artists with fewer resources, the same ones who, in fact, started the legend of house and techno. 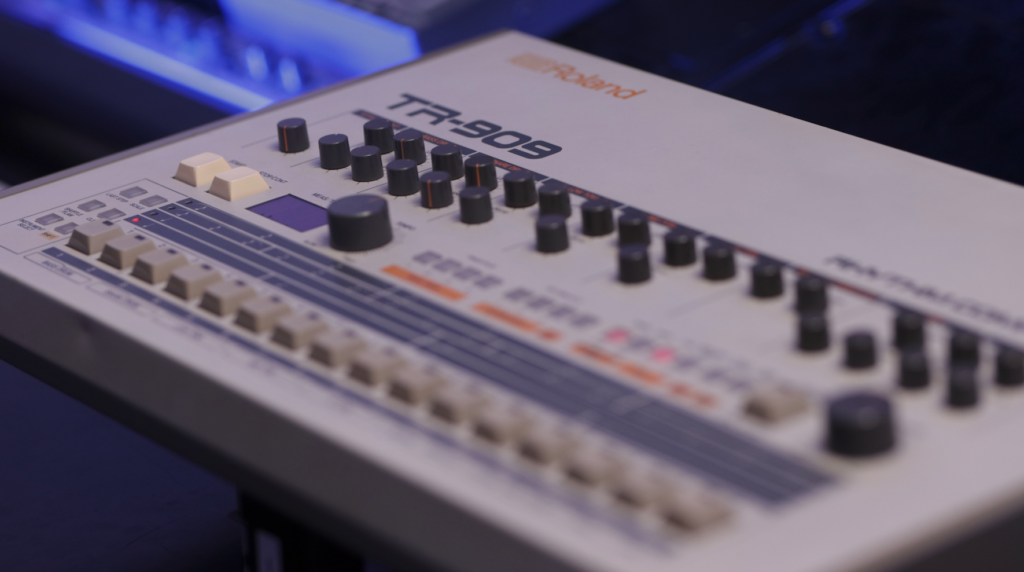 So, at the same time that House began to flourish in Chicago and New York, the dark Techno came to life in Detroit. This futuristic and cold Techno went very well with the vibe felt in the racially-challenged middle-class suburbs of Detroit.

From here come the well-known The Belleville Three (Juan Atkins, Kevin Saunderson and Derrick May), Jeff Mills, Eddie Fowlkes, Blake Baxter, Drexciya and Mike Banks, among many others. These artists were inspired both by the modern sounds of bands like Yellow Magic Orchestra or Kraftwerk, as well as by the psychedelic funk of Parliment or Prince in his early career. And with Roland’s failed and inexpensive drum machines and synthesizers like the Yamaha DX100, one of the cheapest models also of the new FM era, they created the soundtrack of loneliness and sadness that was felt in Detroit at that time.

This is how the TR-909 went from being a failed invention to being the protagonist in the rise of a musical legend. Not being that enough, this is currently one of the most valued and wanted electronic musical instruments in the world.

It’s no wonder that the TR-909’s unique sound is so familiar to us today. These sounds, apparently so limited when they were released, have been the basis of songs that have marked a before and after in techno, such as “The Bells” (Jeff Mills), “Strings of Life” (Rhythim Is Rhythim) or “Star Dancer” (The Martian).

Furthermore, when a great on the scene like Jeff Mills shows you the TR-909 as such a versatile instrument, as he did in his “Exhibionist” recordings accompanied only by the drum machine, the concept of this instrument changes completely. As he himself says, “it depends on how you use technology” (Watch interview).

The famous drum machine is part of tons of drum sound libraries, and it is very easy to find samples to play in your DAW. In a previous post we showed you how to make a Dark Techno rhythm pattern using Ableton Live’s 909 Core Kit Drum Rack (Click here to access it). But today we would like to show you one with the original box to celebrate its anniversary.

Detroit Techno pattern with the TR-909

Here are some simple steps to create a simple Techno Detroit style pattern at 120BPM. So simple that it will be easy for you to follow them even if you have never used it. This will give you an overview of how such a drum machine works.

First of all, we will show you how to erase a pattern in case you already have something recorded. A pattern can be saved on every of the keys with numbers.

Let’s say we want to erase the pattern saved in key 1. Press Shift while pressing button num.1 in the orange section “Pattern Write”.

Then, press Clear while pressing key num.1. It is already erased.

In order to change the tempo, press the button “Tempo” at the same time you turn the knob “Tempo”.

To select any of the sounds of the TR-909 you have to press the button “Instrument Select” at the same time you press the key that corresponds to the sound you want to program.

In order to select the Kick, we press the button “Instrument Select” at the same time that we press Key 1. Then, you can program the Kick on every quarter note by pressing keys 1, 5, 9 and 13.

Select the Clap. To do so, just press “Instrument Select” and Key 12.

Select the Open Hi Hat. This is a special selection case. To do so, press “Instrument Select” while pressing Keys 13 and 14 at the same time.

Select the Closed Hi Hat. To do so, just press “Instrument Select” and Key 13.

Let’s add an accent on the quarter notes. This will give a dynamic intention that will add live to the pattern. Press “Instrument Select” and at the same time the button “Total Accent”. Then, press once on keys 1, 5, 9 and 13.

Turn the knob “Total Accent” to add the quantity of accent you want.

To end our basic pattern, we are going to add some shuffle to it. The way to do it is by pressing the button “Shuffle/Flam” plus one of the keys in order to select the amount of shuffle you want. In this case, we find key 4 to give quite the groove we were looking for.

Now you have some settings you can vary by using the knobs of each sound in the TR-909. You can play with them to find the sound you like, for example, changing the envelope of the kick or of the hihat to make it longer, or making some sounds stick out more than others by simply making a change of levels.

These are just some basics of the TR-909 we have shown you today. If you do not own one, at least you learnt a little bit what it is about. You can always use some samples in your DAW and have a lot of fun as well. Have a happy #909 day!